Every year, tens of thousands descend on sunny Bournemouth to enjoy a weekend of aerial acrobatics and death-defying stunts courtesy of some of the world’s best pilots. From the RAF HC2 Chinook and Super Pitts Muscle Plane to the Tigers Parachute Display Team; visitors are treated to an action-packed weekend of jaw-dropping entertainment.

Every twist, turn, barrel roll and freefall is carefully choreographed to provide onlookers with an exciting experience. The action typically kicks off on a Thursday afternoon and includes three days of excitement capped off with three evening’s worth of entertainment. The night shows are especially captivating as the displays incorporate fireworks and lights into their routine for something that is truly unique.

The Dusk Display features performances from acts such as the Breitling Jet Team, Fireflies and Twister Pair combo. The Night Air programme is sponsored by the Air Festival Patrons Club and usually ends with a stunning fireworks display. The fireworks are launched from Bournemouth Pier at 10pm Friday and Saturday night and are a favourite with audiences of all ages.

Despite its name, the action isn’t limited exclusively to the skies either, as there is much to see and do both on land and out to sea. There are funfairs and refreshment stands as well as military villages and ‘meet the display team’ opportunities for visitors to enjoy. There’s face painting for the kids, circus workshops, demonstrations from Liberty’s Centre Birds of Prey, fire performances and much more.

Plus, every year there are unarmed combat demonstrations in the Lower Gardens as well as a live performance on Saturday by the HM RM Band Portsmouth.

Out to sea, onlookers are treated to the sight of a ship of the British Royal Navy – a Bournemouth Air Show tradition. The Bournemouth Air Show 2018 marked the first appearance of one of the Royal Navy’s most advanced Type 45 Destroyers – HMS Diamond. Guests can enjoy tours of this majestic ship throughout the weekend. The show also marked the 100th anniversary of the British Royal Air Force which was founded April 1st 1918.

If you consider that the Air Show is Bournemouth’s signature annual event, then the RAF Red Arrows are, without a doubt, its star attraction. Every year, the elite pilots of the Red Arrows impress onlookers with their awe-inspiring displays that combine speed, agility and precision. From the Typhoon Roll to the Centenary Split, every show features non-stop crowd pleasers and combines classic and new moves into one breathtaking display.

Founded in 1964, this premier acrobatics team have been wowing audiences with their signature Diamond Nine shape and precision displays for well over 50 years. Flying their distinctive Hawk fast-jets, the Red Arrows have become an icon of British Culture. They serve as ambassadors both at home and overseas, help to recruit for the armed forces and demonstrate the elite and diverse skills of the British Royal Air Force.

Present at every Air Show is the Red Arrows flight simulator located just to the left of Bournemouth Pier. The simulator gives visitors the chance to experience just what it’s like to fly in the cockpit of one of these legendary planes 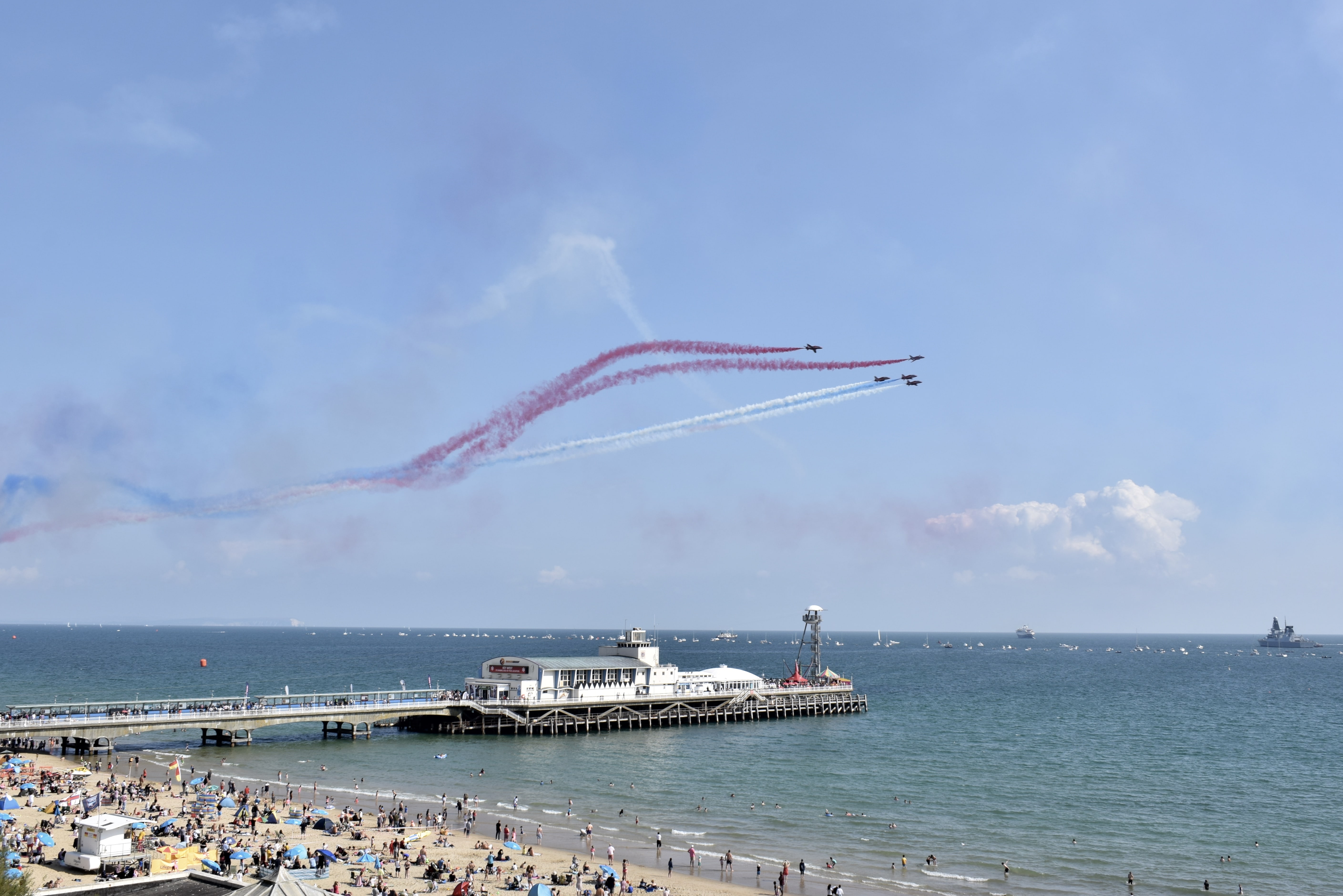 “build and improve your business’ online presence and reputation”

History of the Bournemouth air show

The Bournemouth Air Show is an annual event that first took place in 2008 and for ten years has entertained millions of tourists and locals. In 2008 alone, the event was attended by more than 750,000 people! The FREE spectacle, which takes place between Bournemouth and Boscombe Piers is set against the backdrop of seven miles of gorgeous coastline. But the fun doesn’t end there as there are fun things to discover throughout Bournemouth’s iconic Lower Garden where visitors will find all manner of displays and attractions.

Over the years, the Bournemouth Air Show has won many awards and is critically acclaimed both domestically and internationally. Such awards include the Green Apple Environmental Award (2011), and recognition from the European Airshow Council (2010, 2012 and 2014).

What makes Bournemouth such a great holiday destination?

From its stunning coastlines and gorgeous sandy beaches to its vibrant nightlight, wide assortment of shops, bars, hotels, restaurants and entertainment venues, it’s no secret Bournemouth is a popular destination for tourists. Go a little bit further out, and you’ll discover even more including areas of outstanding natural beauty such as the New Forest.

Bournemouth has much to offer including history, culture, religious landmarks, museums, galleries, parks, gardens and more. Every year, hundreds of thousands of tourists are drawn to Bournemouth by its wonderful microclimate. From late spring to early autumn, the local weather makes this seaside town a popular holiday destination. Recently described as ‘the Miami of the UK’, Bournemouth’s gorgeous sandy beaches are a stand out feature for locals and tourists alike.

If you happen to be visiting Bournemouth during the Air Show season, this is one event not to be missed. For ten years, the Air Show has brought entire communities together and provides a great way to experience a small part of Britain’s history. It is a fantastic opportunity to admire the courage and bravery of the pilots taking part in the show while learning more about the brave men and women of the armed forces.

What’s more, you won’t find a better setting than sunny Bournemouth! With the 2018 show having now drawn to a close, the countdown to the Bournemouth Air Show 2019 has officially begun!

We'd love to hear from you

How can we help?